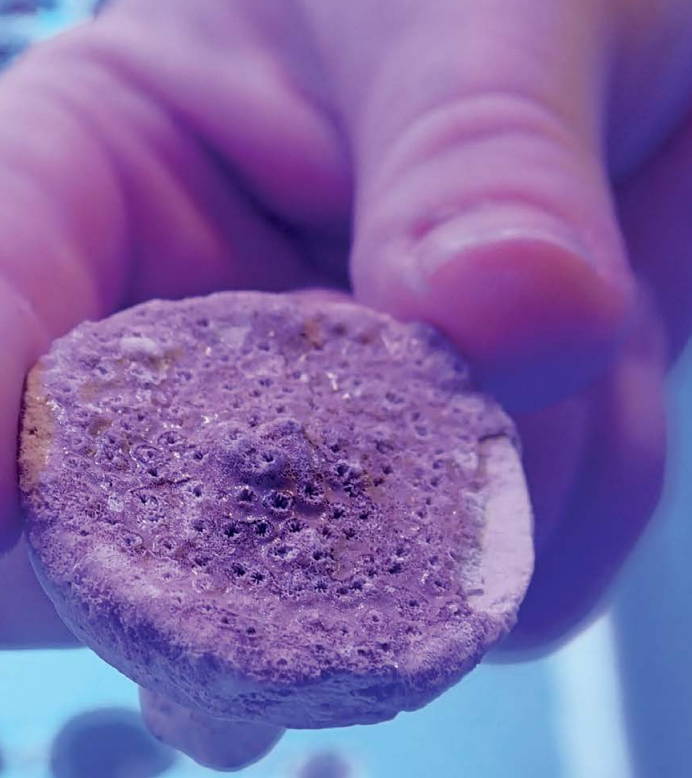 THE PROBLEM
So what is stony coral disease? “It’s not coral bleaching, it’s much more serious,” says Allison Delashmit, Community Relations Manager of Mote Marine Lab. “We do not know what it is. It’s not the usual ‘bleaching,’ where coral turns white but not necessarily dead. In stony coral disease, the white means dead tissue. The coral is deceased and cannot come back to life. It was originally found in 2014 on coral reefs in Virginia Key, where the inception of the disease spread through Miami and down into the Keys, and it seemingly has stalled right now at the Seven Mile Bridge area. The disease kills the coral outright. We are not sure where it came from — possibly raw sewage combined with heated water and dredging to combine for the perfect storm.”

In April 2018, divers reported contamination in hallowed Looe Key, and scientists believe it is bacterial in nature as it seemingly responds to amoxicillin treatment. “The thing is that nobody knows if disease spread is waterborne, i.e. through parrotfish transmission, sea currents or some other mechanism, but we are already starting to see its spread in the Caribbean,” states Delashmit.

THE STOPGAP PLAN
A few stopgaps have slowed the spread so far. “Currently, we have found that if we dig a ‘fire trench’ in the coral, in essence a demarcation line on the coral heads, it slows the spread of the disease and prevents it from jumping over to kill the entire coral head,” she states. Slowing the spread is the first goal, but the ultimate plan is to eradicate the disease altogether, and there are beacons of hope. “Scientists are sharing studies amongst each other, which is groundbreaking in the community, and we are all growing coral completely resistant to disease now, so there is some light at the end of the tunnel. But it’s going to be an undetermined period of trial and error.

“...We are all growing coral
completely resistant to disease
now, so there is some light at
the end of the tunnel.”

CORAL GROWING
Mote Marine scientists, along with the help and funding of NOAA, are growing coral in contained submerged units at the marine lab to test and repopulate the reefs. Currently, a robust coral growth operation is underway. “For what takes 100 years to grow in the wild, we can grow in two years,” says Delashmit. “We are engaging in massive coral growth in house up to 1 inch per year. We cut the coral, which needs to repair itself, like a healing cut on your body, it grows 40 times faster than in the wild.” The process is called microfragmentation, where 1 centimeter size pieces of coral are glued to ceramic plugs to adhere to and thrive on a submerged platform. In essence, it’s like raising babies in a nursery. But there are serious issues in the growing and replanting process.

“One of the major challenges is that coral will only fuse together if from the same genotype,” says Cody Engelsma, Coral Sexual Reproduction Specialist at Mote. “We can’t just work with one piece of coral to grow colonies. We need diverse genotypes, so if one genotype gets wiped out, infected, others will survive. And that makes it a tedious task. We engage in the process of taking the gamete bundles, separate the sperm and eggs with a fine mesh cup; then, polyps find a settlement site to root for life. When planted, we scrape the halos around the coral to grow and hopefully not get outcompeted by surrounding algae.”
Currently, there are more than 30,000 baby corals on-site getting ready to be replanted on the reefs to try their hand at life.

REPLANTING
The growing of coral colonies is an arduous task as a four person team at Mote Marine cuts the coral, maintains tanks, plants the coral and monitors the growth. Th e “matchmaking” in the wild is truly a monumental hope, wishing on a wing and a couple of prayers. “Coral reproduce only once a year on the August full moon, after midnight, and only in a five-day window,” says Engelsma. Dr. Hannah Cook manages the spawning program as she is the “matchmaker” assessing genetic favorability for coral polyp growth. Cook’s biologists go out to the reefs and collect eggs and sperm to bring back and grow. In the wild, natural coral reproduction has only a one-in-a-million chance once every 25 years to happen, so the challenge to grow resistant or healthy coral is gargantuan.
“The plugs which coral are grown on in the lab are ceramic, as coral polyps adhere better than cement due to the PH and algae growth on cement,” says Engelsma. Dakota Merck, Mote staff biologist, is responsible for cutting the coral polyps and gluing them to plugs. “Coral larvae land on the plugs, where we spray a halo around each one, making sure algae doesn’t take root,” says Merck. “Once a coral grows its skeleton, we can transfer them, create duplicates and cut them to grow more for replanting in the wild.”
Permits are secured from NOAA and FWC to replant corals on the existing reefs. Th e “coral babies” are affixed to specially designed “coral trees” built with PVC pipes that offer better waterflow when suspended, allowing thickets of coral colonies to repopulate when planted. To date, over 100 coral trees have been deployed in Looe Key and 50 in Key West. Th e results have generally been positive so far. Th e ultimate goal is to “reskin” the reef area and grow stony disease strain-resistant coral that will thrive for generations to come. 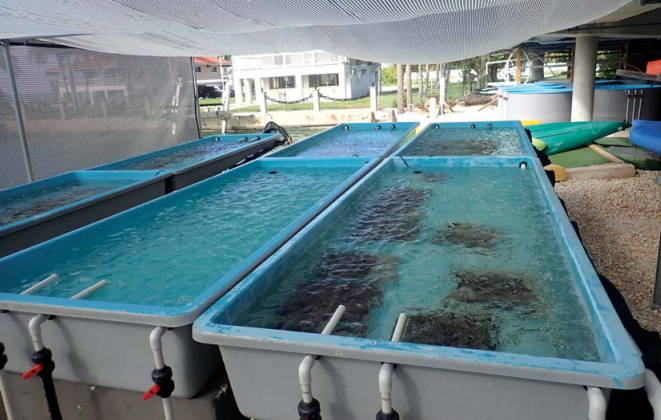 THE PROJECTION
The frustrating task at hand is two-fold. First, scientists need to identify just what exactly the disease is and where it is spawned from. Second, to grow and repopulate dead or dying coral is paramount to replenishing the species so as not to put coral grown after years of study and care to simply be wiped out again. The immediacy and direness of the situation has brought in many partners who seek to get involved with the initiative. Dr. Michael P. Crosby, Mote President and CEO, shared Mote’s plans to build an additional landbased coral nursery on the property of famed Bud N’ Mary’s Marina in Islamorada in the Upper Keys — the first of its kind in Islamorada. “We’ve been incredibly successful with our efforts in the Lower Keys, but to meet the urgent demand of restoring our rapidly declining reef, we must double our operations and capacity to serve additional parts of the reef tract.”
Sara Stanczyk of Bud N’ Mary’s elaborates, “The set up will be an outside
marine nursery along our beachfront; a runway of tanks growing coral
fragments. It’s a one-of-a-kind set up. We are all trying to do our part to
protect our reefs.” Will it all work in the long run to eradicate stony coral
disease and replenish the coral reefs? Only time will tell.

RESCUING CORALS
Dr. Abby Renegar at Nova Southeastern University is in charge of the Florida Coral Disease Rescue Project. “In 2014, an unidentified disease was observed and spread to the Florida reef tracts, south of Miami into the lower Keys in 2018 affecting 25 out of the 45 stony coral species now,” notes Renegar. “It’s a strange pattern in that you can have two corals of the same species right next to each other; one dies and one is completely untouched. We need to figure out why that is. It’s scary that we are seeing 50% to 90% reduction in abundance of certain species and because of the severity, one third of coral species may go extinct. That’s why we have taken initiative with the rescue project.” In collaboration with FWC, NOAA, DEP, NOVA, MOTE, ASA and other agencies, there are two main goals set for the program.
“First, the immediate goal is to neutralize the threat and prevent ecological extinction by collecting disease free corals to maintain genetic diversity for restoration,” states Renegar. “Secondly, we assist in reproduction of corals. They have never been kept in captivity before, and we are learning what is needed environmentally to reproduce corals in captivity. Eventually, with successful reproduction and growth, we will take the offspring and transplant them back to the reef.” In the local media, the project has been termed “Noah’s Ark” referencing taking species of coral and putting them in a safe space to insure their survival. Renegar adds, “We are currently seeing some spawn in captivity, though there is a lack of information on the mode of reproductions so it is our best educated guesses as to getting continuous successful reproduction. If we can get corals to reproduce in an ex situ environment, we can get a better understanding about their biology to grow and save them. We’re learning things nobody has ever breached before in science, and I think that’s pretty exciting.” Under the rescue program, there are 59 rescue sites with 1,852 colonies presently under care.

Facilities housing corals and updated data can be found at myfwc.maps.arcgis.com/apps/opsdashboard/index.html#/eba7dc2cabc64f60819e6d4b084d94cd.
Updated information and maps on the spread can be found at floridakeys.noaa.gov/coral-disease/disease.html.