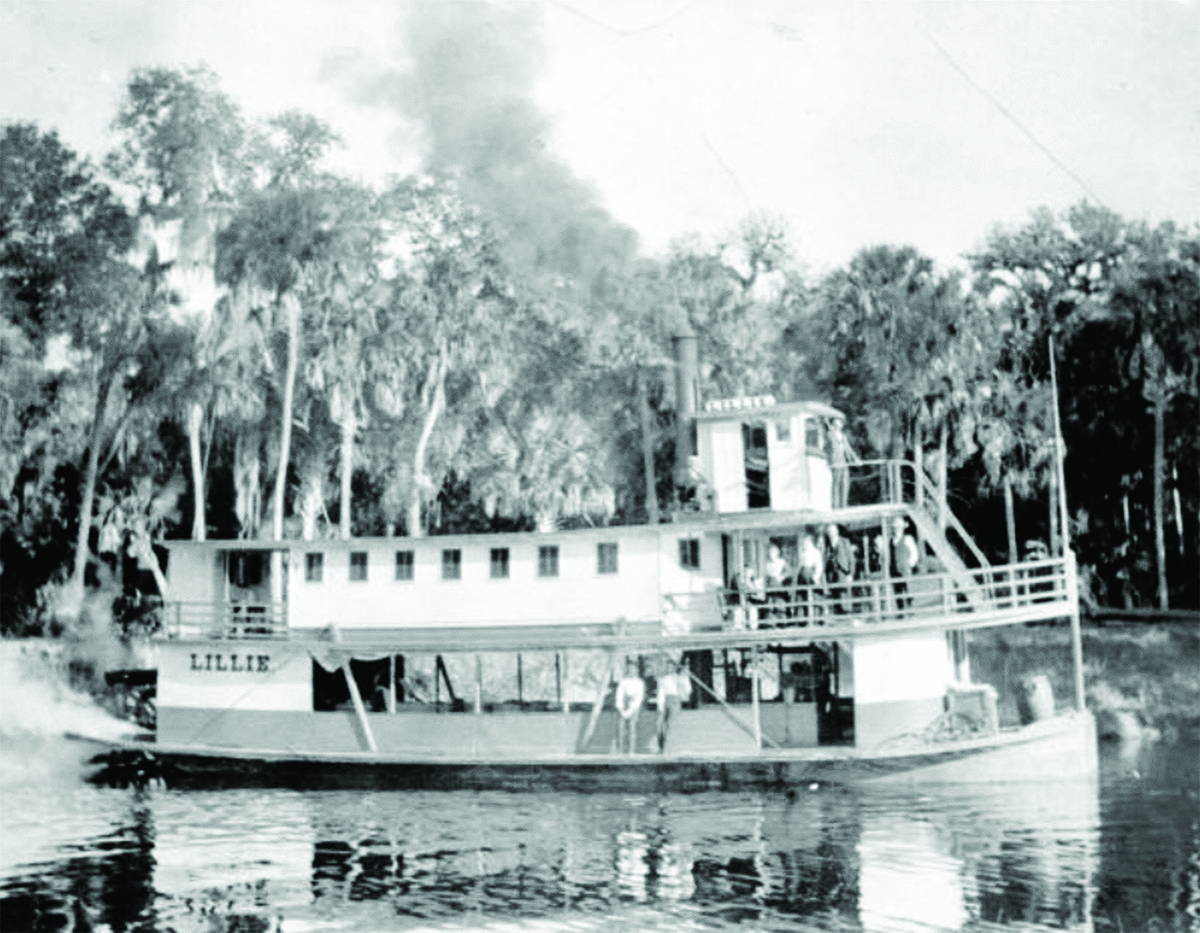 “It isn’t as it used to be in the old times. Then everybody traveled by steamboat ...” wrote Mark Twain in his great American novel, Life on the Mississippi. And so it was for the Kissimmee River in Central Florida at the turn of the 19th century. With the end of the Seminole Wars, the opening of Florida to commercial trade had begun.

Soldiers, native Seminoles and hardy pioneers all looking to make a future or fortune settled along the winding Kissimmee, where steamboats and stallions connected the great watershed of Central Florida to the Gulf of Mexico. Fish camps, cow camps and trading outposts dotted the shorelines — the truck stops, convenience stores and motels of their day. In a stand of dense oak trees, oering welcome shade from Florida’s brutal summer sun, one such outpost arose on the north bank of Lake Kissimmee. It would become simply known as Camp Mack.

Roughly a century later, it would become Camp Mack, a Guy Harvey Lodge, Marina and RV Resort. Established on the grounds of Fort Gardiner, once commanded by U.S. Army Col. and future 12th President of the United States Zachary Taylor, Camp Mack’s riverfront setting was well known among all who called the Kissimmee River home — especially among the colorful steamboat captains who kept the wheels of commerce turning ... paddle wheels to be clear.

The headwaters of the majestic Everglades ecosystem are found in Kissimmee, Florida, first settled on the northwest shore of Lake Tohopekaliga, better known as “Lake Toho.” In 1881, almost a century before Walt Disney turned Kissimmee into a theme park juggernaut, another industrialist and real estate developer, Hamilton Disston of Philadelphia, purchased 4 million acres of Central Florida. In an area larger than Connecticut, and mostly swamp, Disston’s vision was to transform the Kissimmee River into another Mississippi and create a “Florida Delta” rich in agriculture, ranching and trading. In exchange for dredging the southern half of Florida, the state had made him the country’s largest landowner. And in this sparsely populated settlement on the riverbank of Lake Toho, he staked out his next fortune, establishing a dredging operation that spawned the age of steamboats in Florida.

The gilded age it was not. Travel along the Kissimmee River was a grueling, twisting journey for all. The steamboat captains who ran the dangerous waters were a resourceful group. Water levels often left boats stranded in tangles of vegetation requiring crews, and sometimes passengers, to pull the steamboats into deeper water. Once described as a “snake’s dream of heaven,” no boat nor captain was immune to the river’s danger, especially come nightfall when pitch dark surroundings made travel impossible, if not lethal with then- abundant Florida panthers on the prowl. The end of a day seldom came early enough, often only a few miles from where it began.
Just to the north of Camp Mack is Shell Hammock, recently added to the National Register of Historic Places. Built in 1881 in the Florida Cracker architectural style with a signature wraparound porch and large window openings, the two-story rooming house and dock served weary steamboat travelers anxious for comfort food, cold drinks and a good night’s rest. Originally known as McQuaig Landing, named after its owner and steamboat tour entrepreneur Charles McQuaig, the area became a popular layover for anyone making their way through the region.

“It isn’t as it used to be in the old times. Then everybody traveled by steamboat ...”

The steamboat industry was in full bloom by this time. Big double-deck steamers traveled the St. Johns River bringing visitors from Jacksonville to Mellonville (today’s Sanford), a town where “civilization stopped” as reported in the day. From there it was overland by mule trains over rutted sand trails to Kissimmee. At the end of the road, four steamboat lines oered
river transport on small, single-deck steamers suited to the narrow, twisting Kissimmee. The 150-mile journey from Kissimmee to the coast at Fort Myers was a grueling 50-day excursion, and everyone traveled steerage. Today, of course, it’s just a three hour drive. “Where the road ends, your adventure begins” reads the tagline today for Camp Mack, a Guy Harvey Lodge. True today, but especially true back then.
The homesteaders and ranchers living and working inland of the old Fort Gardiner made McQuaig Landing and nearby Camp Mack a popular layover on this long journey. Mary Belle, Lillie, Rosalie, Roseada — they were just a few of the “ladies” who frequented; they were ungainly boxy looking steamers named after wives and daughters of their dedicated captains, the most legendary of which was Captain Clay Johnson. For more than 40 years he was known by all as “King of the Kissimmee” or the “Kissimmee Water Cowboy.”
A native of New Orleans, Captain Clay was proud of his physical resemblance to Mark Twain, and while not a storyteller of equal renown, he could curse with the best sailors of the day. With entertainment in short supply along the Kissimmee, and a captain whose skills on the river were without compare or challenge, he was equally well known for often delaying steamboat schedules in order to host impromptu fiddle dances while in port. At times while underway, he would even take to the roof of his pilot house and play for anyone — or anything — within ear shot. These days, the cruise ship industry would call this onboard entertainment.
Steamboat landings like McQuaig were boisterous hubs of lodging, hospitality and trading. Along the river’s route through Lake Okeechobee to Fort Myers and the Gulf Coast, catfishing was commercialized with the
advent of fish camps that transported bountiful catches north while ranchers transported their herds south to the coast for shipping to Cuba and beyond. Camp Mack was a trading post for cattle, lumber, turpentine and other goods being used to forge civilization out of the swamps.
Steamers and barges lined docks along the riverfront in the area where the Camp Mack fuel dock now sits. A lonely hand crank gas pump sat alongside the earliest general store at Camp Mack, tended to by “Camp Mack Robert,” a friendly fixture of local knowledge on this portion of the river. As word spread among wealthy sportsmen of the adventures to be had in the wild and untamed Kissimmee River delta, they beat a path to Camp Mack Robert’s door for outfitting hunting and fishing expeditions in the heart of Florida wilderness. The Outfitter Store today stands much as it always has, still helping visitors organize and equip themselves for their adventures on the Kissimmee Chain of Lakes.
Industrialists, entrepreneurs, corporate executives and the occasional President have all passed through Camp Mack. When he wasn’t inventing the telephone to upstage Thomas Edison, who wintered down river in Fort Myers, Alexander Graham Bell created the first airboat, furthering his passion for hunting and fishing in areas where roads could never be built. It wasn’t a pretty contraption, earning the name the “Ugly Duckling.” His
invention spawned an industry that fueled further exploration of the lakes and swamps that fed the river’s course to the coast, all while Disston continued to carve the canals that would ultimately scar Florida's wild beauty in the name of progress.
Steamboat landings forged communities out of the swamps, off-ramps to intermittent pockets of civilization along the river as nature could not be tamed easily or quickly. Nine years into his e ort to transform Florida, Disston’s success in draining the Kissimmee valley came to cause flooding
around Lake Okeechobee and west along the Caloosahatchee River that connected to the Gulf. Intended canals south and east out of Lake Okeechobee were left unbuilt, and by 1896, his fortune had been lost and he died penniless in his hometown of Philadelphia.
Today, the steamboats are gone, as are the steam locomotives that oil and rail tycoon Henry Flagler pushed south through Florida 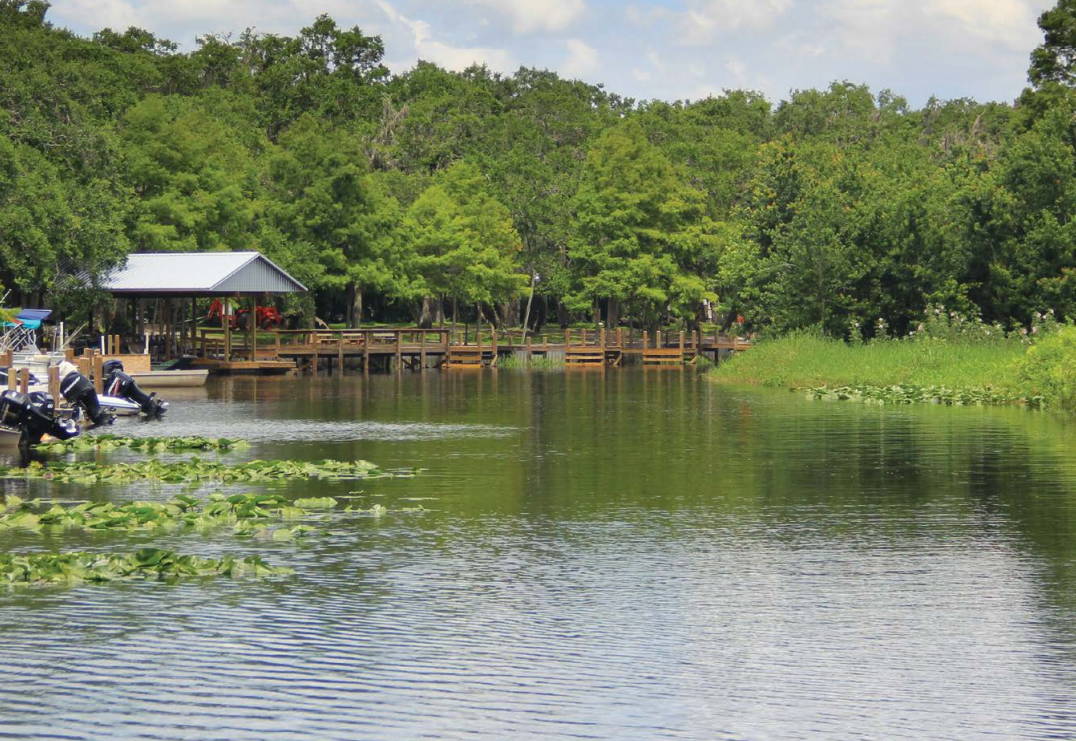