A KANSAN TAKES THE WHEEL

A KANSAN TAKES THE WHEEL 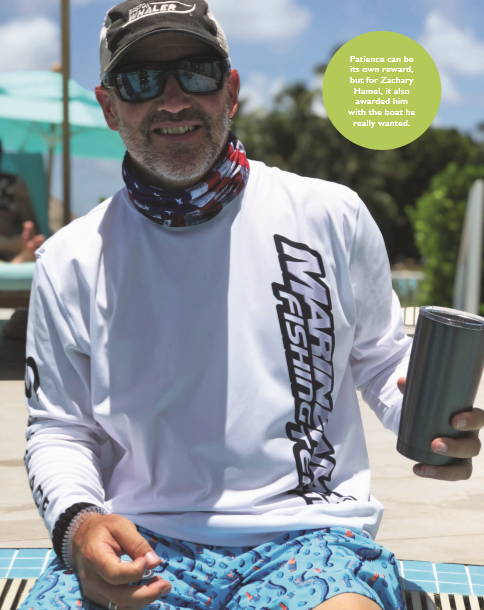 To say that Heather and Zachary Hamel took a deliberate approach to buying their first offshore boat would be a vast understatement.

For years, they traveled from their home in Kansas City, where Zachary worked in investments, to boat shows in South Florida, getting to know the plethora of makes and models available. In the process, they met up with Diamond Neeley, a sales executive and Boston Whaler brand ambassador at the MarineMax boat dealership in Naples. Diamond would serve them as an invaluable teacher and consultant whose patience, lucky for the Hamels, erodes about as quickly as a gemstone.

“He spent a crazy amount of time with us,” Zachary said. “He teased out of us what we really wanted in a boat, and that wasn’t easy, because I had lived in landlocked Kansas all of my life. He never pressured us to make a decision. He was more concerned about getting us the boat that was right for us.”

Zachary gravitated to and kept coming around to Whalers, finding that they are “overbuilt, built to last.” Zachary describes himself as something of a “Safety Sam,” the kind of guy who stows on his boat as many replacement parts as he can readily buy. “When you come from Kansas, the idea of an unsinkable legend sounds pretty good,” he said. Indeed, Whaler, in its past, has produced commercials in which a small Whaler is sliced with a chainsaw — and the halves remain afloat. At the Miami Boat Show in 2017, Heather fell in love … well, not for the first time. She and her husband walked through the 350 Whaler Realm on display and found much that they liked about it. But when the Hamels moved on to tour the 380 Realm, “it had everything I wanted,” Heather said.

“I had a lot to learn. But whenever I have a question or a concern, MarineMax and Whaler bend over backward to help.”

Zachary would soon retire, and the Hamels, a family of eight, would move to Naples, Florida. Meanwhile, they had found their boat. “We placed an order, but the Realm series was just being launched, and it was going to take about a year before the boat would come in,” Zachary explained. He worked out a deal with Diamond to buy a 380 Whaler Outrage with the understanding that he could sell it back to MarineMax when the Realm arrived. The Hamels have now had their Realm for two summers, and Zachary has grown comfortable at the helm. (Maybe they should call it healm.)

“I wanted multiple engines and a boat capable of making long runs — Bahamas and the Keys,” Zachary said. “It needed to be able to handle whatever may come up. You may take off in what looks like pretty good weather, and all of a sudden you find yourself in six-footers and you want to feel safe with your wife and children or your guests.”

The Hamels’ 380 Realm is powered by four, 350-horsepower Mercury outboard engines, and Zachary has found that it cruises comfortably at 40-plus miles per hour with six adults and their gear onboard. He is grateful that his boat is equipped with Seakeeper anti-roll technology that has the effect of neutralizing rough seas. “It is an absolutely amazing piece of equipment,” he said. Heather is a fan of the boat’s creature comforts and its summer kitchen. “We can have the whole family on board and everyone is comfortable,” she said. “The kitchen is great. It seems like I am always in the kitchen, no matter if I’m at home or on the water.”

The Hamels have found that as a product of their dealings with MarineMax and Whaler, they have become part of a close-knit boating family. They have attended multiple Whaler rendezvous in the Bahamas, where they have enjoyed the camaraderie and knowledge-swaps that take place there. Diamond and Zachary have become friends who often lunch together.

“Had someone sold me a boat, handed me the key and said, ‘have fun,’ it would have been too overwhelming for me,” Zachary said. “I had a lot to learn. But whenever I have a question or a concern, MarineMax and Whaler bend over backward to help.” 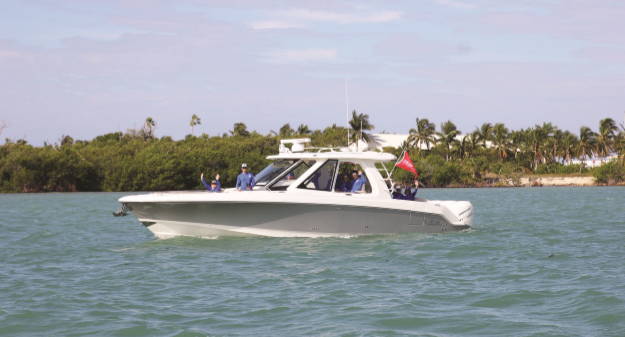