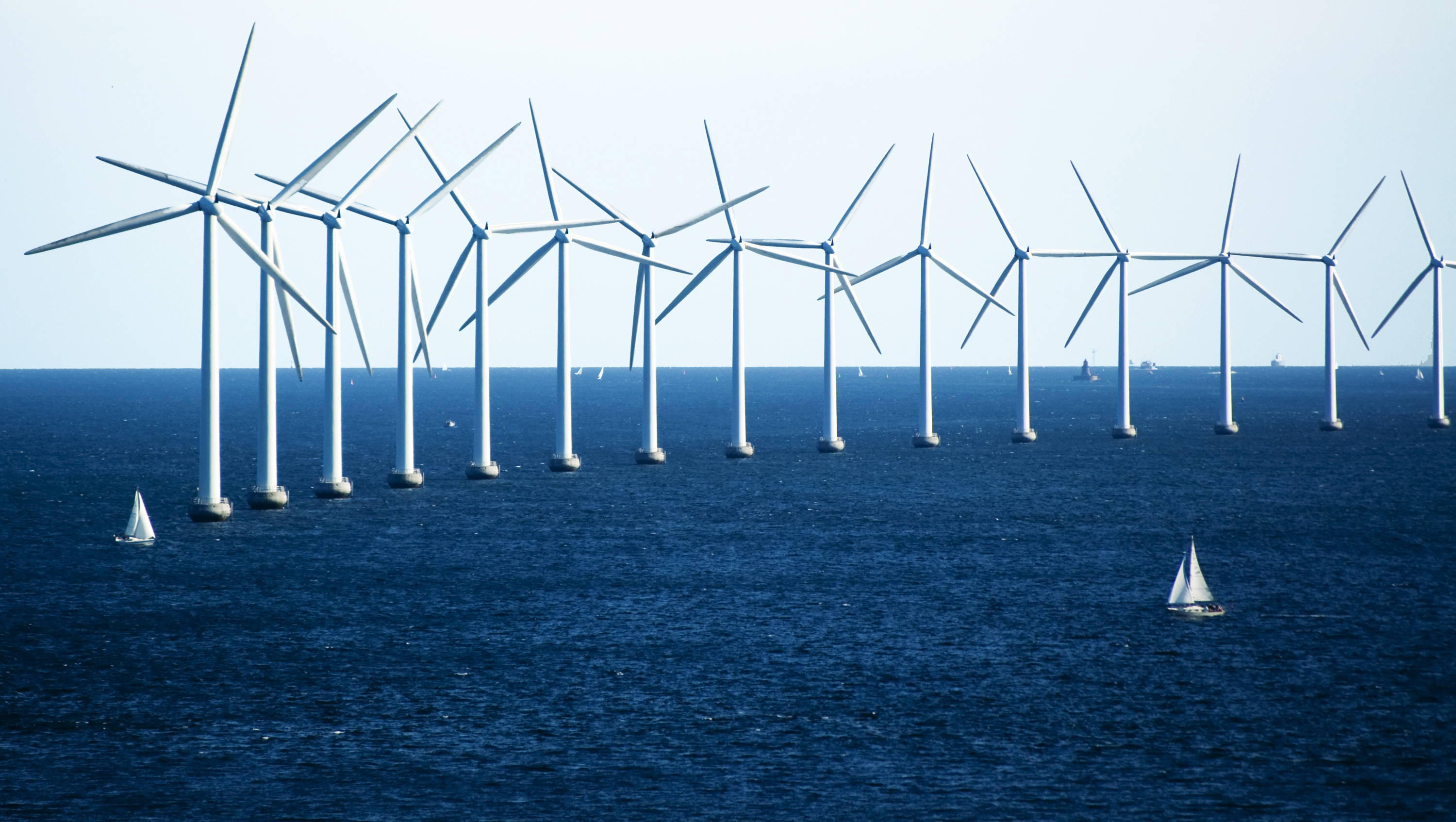 Offshore wind farms have been established in Europe, most notably Denmark, since 1991, and the first offshore wind farm has already been planted in the U.S. The Block Island Wind Farm off the coast of Rhode Island, consisting of five, 6-megawatt turbines with submarine transmission cables, lies three miles off the island and allows angler access, as of now. According to the Bureau of Ocean Energy Management (BOEM), engineering plans for the near future consist of building a wind farm off of Long Island, NY, complete with 15 wind turbines, an offshore substation, and the 30-mile power cable that will run to East Hampton, NY, as well as wind farms 10 to 20 miles offshore of New Jersey inclusive with offshore substations and subsea cables. The Block Island Wind Farm has only been operational for two years, so no hard data has been collected on the long-term impacts to marine life. BOEM is also reviewing the electromagnetic field (EMF) effects of the transmission line on sea life. Wind farms have a projected lifespan of around 25 years. So, are offshore wind farms a good or bad proposition? I recently attended a meeting in Toms River, NJ, with representatives hailing from the windmill companies Orsted, Equinor, EDF Renewables, Anglers for Offshore Wind Power, and a general public attendance of recreational and commercial anglers. Here were some pros and cons.

Clean, safe energy — Offshore wind farms produce relatively cheap, renewable, clean energy that benefits a community. Unlike offshore oil platforms, there is no chance of an oil spill or explosion that would destroy the surrounding ecosystem and wreak untold ecological damage. No doubt, that is peace of mind when considering the implementation of energy sources.

Also, the growth of renewable energies, such as wind and solar, continues to reduce our dependence on foreign oil and lower the output of greenhouse gases, which are contributing to climate change. According to the U.S. Department of Energy, more than 25 offshore wind projects with a generating capacity of 24 gigawatts are now being planned, mainly off the U.S. Northeast and mid-Atlantic coasts. That is enough energy created by the wind to power almost 20 million homes and eliminate the burning of more than a million gallons of oil per day.

Fishing potential, submarine growth — Much like the oil rigs out in the Gulf of Mexico, California, and other regions, years of operation in the marine environment will collect sustained marine growth on the structures, in essence creating a contained ecosystem, with which the cycle of life attracts. Windmills could become a little oasis in the ocean where barnacle and mussel growth will bring crabs, sea worms, and baitfish, thus attracting gamefish like tuna, striped bass, blackfish, and such. That kind of life adds up to a major fishing platform. Paul Eidman, charter boat captain and spokesperson for Anglers for Offshore Wind Power, has fished the Block Island turbines and states. “There are already four tons of mussels growing on each of the Block Island turbine stanchions,” he stated. “Once the mussels take hold, it goes right up the food chain. We’ve had great days fishing for sea bass already there.” Angling potential increases and the platforms can offer a great fishing opportunity in an otherwise barren ocean area. Windmills slated to be built in New Jersey are projected to be laid out in straight lines, .71 to .78 miles apart, to allow for commercial clam dredgers, scallopers, and squidders to effectively work their gear through the area.

Environmental and biological impacts — Of utmost concern among the public is environmental impact. “There’s a lot being proposed to go out in the ocean and on the bottom,” said Tim Dillingham of the American Littoral Society. “The construction of undersea cables, as well as the windmills themselves, will disturb a lot of submarine ground.”

The ocean is a delicate place. Unlike wind farms on land, marine mammals, fish migration, and life patterns may be disturbed. Some have concerns that vibrations of the turbines and EMF pulsing could disrupt whales, tuna, sharks, and dolphins. Also, seabirds could be negatively affected. Turbines are massive structures, with height spans between 580 feet and a maximum of 840 feet tall, that could impact bird migration or cause issues that have yet to be identified. At this point, the science is in the gathering process and is too young for us to know how windmills will impact marine life.

“You’re talking about a forest of these turbines, not just one or two, here and there,” noted Robert Rush, Jr., of United Boatmen and a member of the New Jersey Marine Fisheries Council, while speaking to the windmill companies. “We haven’t seen the science yet, any scientific data, for potential effects on the region’s fish populations. If you can’t show the science, we’re not on board.” Representatives from Orsted admitted there was no scientific data that addressed how the turbines EMF and vibrations would affect fish migrations and populations. However, a study on Denmark wind farms found a direct correlation between the strength of EMF from undersea cables and increasing avoidance behaviors around those cable and decreasing catch of flounder.

“Even if you take one fish species out of the food chain from the EMF’s influence, it will affect the entire ecosystem,” added Rush.

Submarine cables running to the windmills will be buried six feet under the sea floor, possibly destroying indigenous mussel beds and prolific submarine substrate, but Doug Copeland of EDF Renewables assures they are taking that into consideration. “All windmills and construction will be responsibly sited,” said Copeland. “We will actively research seafloor mussel beds, structures, and shipwrecks so as not to disturb habitats during construction.”

With plans to construct the windmills in just 60 to 100 feet depths in South Jersey, some wonder if a hurricane or nor’easter, with the punishing power of Superstorm Sandy, would damage the structures. They are built to withstand hurricane force winds, but nature has shown how unforgiving she can be.

Angler access — Will the windmills be off limits to sport fishing? Angler access is the number one concern for recreational fishermen. Post 9/11 along the NY/NJ area, things are still a little locked down, more so than other areas of the country. Many security protocols have been implemented for structures and transportation avenues along the metro shores. That said, with energy-generating platforms lining the sides of major international trade shipping lanes, you would expect some security measures would eventually be put into place. Therefore, anglers are concerned that to sell the wind farms, wind companies are pandering to the angling community allowing them to fish by the structures carte blanche.

“We have no intent to shut off any angler access to the windmill platforms,” stated Copeland. But many anglers are worried that it’s only a matter of time before federal, governmental (e.g., Homeland Security), or private windmill company restrictions come into play, closing off sections of the ocean to fishing.

When pressed for more information on angler access, Copeland stated, “We know that there will be safety zones implemented around the substation platforms. We do not know how wide the zones will be yet.” Anglers voiced an opinion they want a written guarantee that access will not be limited.

Socioeconomic issues — Unsightliness from shore, aka “Visual Pollution,” is also a concern to the state’s economy. The bulk of state tourism along the East Coast, especially in New Jersey, is dependent upon the shoreline view. According to BOEM, wind farms built within 26 miles offshore can be viewed from shore on a clear day, which has the potential to negatively affect tourism and property values.

Offshore wind farms have the potential of reducing the threat of oil spills and reducing our dependence on fossil fuels. They also will provide a habitat for marine life and potential new opportunities for angling. However, moving forward with the complete science, not to mention the impact on the submarine biomass, begs the question: are we moving too fast into uncharted waters, so to speak? A segment of the fishing community has come to the conclusion that we should wait until legitimate scientific data comes in, in respect to environmental and biological impact, before any state further commits to mass production and leasing of lands to offshore wind farms.

Of course, when energy is at stake—whether it’s fossil fuels, wind, solar, or nuclear—the path forward may not always be simple or easy.