4ocean – The American Dream to Stop an International Nightmare

4ocean – The American Dream to Stop an International Nightmare 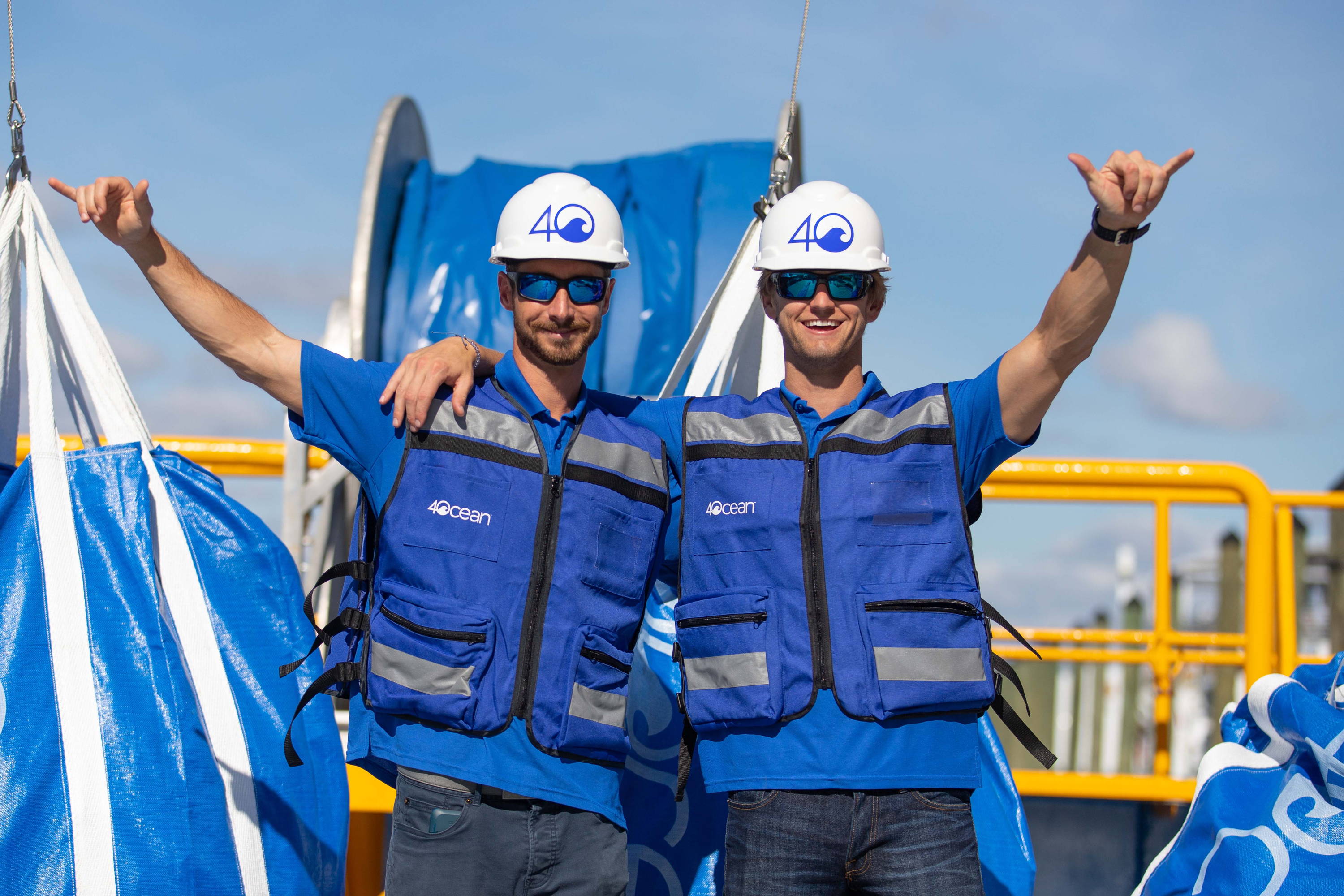 4ocean—the name says it all. Its inspiring story explains how the ubiquitous glass bead bracelets, seen on wrists around the world, are creating a tsunami of a movement to reclaim and reuse ocean plastics. But the truly amazing part of the evolution of the 4ocean company is that two young South Florida surfers became trailblazing entrepreneurs nearly overnight and now seek to totally disrupt the plastics industry—worldwide.

When Andrew Cooper and Alex Schulze went to Bali on a surfing vacation after graduating from Florida Atlantic University, they didn’t know it would be life changing. They were horrified when surrounded by the tremendous amount of plastic refuse on the beaches and were puzzled by the fishermen coming in with nets filled with plastic and throwing the trash back into the water. When they asked why, the fishermen answered, “We are paid to catch fish, not plastic.” So their brains started spinning on how to turn the problem around. They asked themselves, “What if we could pay fishermen to pick up plastic instead of fish?” And, with that, they went back to South Florida and formulated a plan.

Creating a unisex, recycled product that they could sell to raise money to get the plastic out of the oceans and off the beaches became their vision. Some thought they were crazy, but some thought it would work, and before long, Cooper and Schwartz quit their day jobs and started an LLC, a website, and an e-commerce and social media plan to sell totally recycled product bracelets at $20 each, to accomplish their goal—cleaning the ocean one pound at a time.

Just two years later, 4ocean is headquartered in Boca Raton, Florida, is active in 27 countries, have established collection and recycling centers in Bali and Haiti, just opened in the Philippines, and has Hispaniola and other international markets in its sight. The company employs more than 300 people, has 22 vessels and recently purchased a 135’ commercial boat with a deep-sea boom, barricade, and crane system that can operate at river mouths, where its panga fishing boats are too small to maneuver. The company has already removed more than four million pounds of trash from the oceans and coastlines—and that doesn’t even count what its volunteers have amassed in hosted ocean cleanups around the country. A real-time “trash tracker” on their website keeps count, and videos tell compelling stories of the company’s establishment and growth.

“We did not come from ocean cleanup backgrounds,” says Cooper. “We are ocean lovers who saw the devastating state of plastic pollution and wanted to clean up the mess at our feet. We would have done it with a giant plastic magnet if we could, but even if we did, we’d have to clean it up again because we’d still have the problem tomorrow.”

Since an estimated 90% of plastics found in the ocean are land-based, 4ocean took on the challenge not only of gathering and recycling plastic, but also of preventing plastics from getting to the ocean. Recognizing the huge industries built on the use of plastic and everyday items like cutlery and containers for personal hygiene and medicines, the team adopted a three-pronged approach:

Having lived in Florida where municipalities, waste removal companies, and concerned citizens joining non-profit organizations manage the domestic plastic problem, the duo had an eye-opening experience in Bali. They learned that in areas of high population and poverty, where there is no waste management infrastructure, people throw trash in the street, where it ends up in gutters and then in streams. River mouths are where most trash gathers, so they looked at how to collect the trash and plastic at the source before it washes out to sea. Another part of the plan was educating communities on the benefits and logistics of proper trash disposal.

They began in Bali where they hired fishermen who used their river and ocean boats to “catch” plastic then bring it ashore to sort, clean, and store for eventual use. They have recruited more than 700 volunteers and their families for beach cleanups, and Bali was established as the 4ocean international headquarters.

While in South Florida, an ironic situation brought the team’s attention to another poverty and pollution-stricken target location. Yellow, plastic bottles embossed with “vinegre” were being found on beaches. Recognizing the Creole word for vinegar, the bottles were traced all the way back to Haiti. Cooper and Schulze went there and found rivers of plastic discarded on the streets. In addition to all the daily trash, they found out that Haitians transported water in plastic bags, and then discarded the bags, with a multiplier effect. Now, 4ocean pays locals to pick up trash and hired eight fishermen, using 22’ panga boats, to pick up plastic—and made it more profitable than fishing, especially where native fish were not living long enough to be big enough to eat. The company built its own cleaning facilities and now has 15-20 beach teams to gather, sort, bale and take trash to third party recycling facilities on the island seven days per week.

Cooper and Schulze realized a major part of the problem is the companies that heavily use plastic—the grocery, medical/pharmaceutical, and cosmetic/personal hygiene industries—are huge and slow to change. They see these markets in need of disruption and seek to provide sustainable and convenient solutions to single-use plastics. The amount of recovered plastic to date is much more than can be immediately recycled, so quantities of it are stored. In the interim, 4ocean is working to create more products made from recovered consumer plastics—like the bracelets, made from RPET (water bottle-type plastic), with beads made from recovered glass bottles. Each bracelet is ocean-themed with a stainless steel charm, so they can be purchased in multiples to create collections. They are recyclable, as well, once the stainless charm is removed. 4ocean is also producing branded, insulated, reusable water bottles and hopes to announce more products soon. In proving the commercial success of this retail model, the team hopes to inspire more entrepreneurs to seek other ways to capitalize on the problem, turning solutions into more profitable businesses.

“You don’t have to be a non-profit to ‘do good,’” says Schulze. “We want to be living proof, and have new companies follow in our footsteps, and show that you can control a company with a vision. We can create a huge disruptive chain of companies,” adding that other recovery and recycling companies and those seeking to use ocean plastics can impact change.

The logistics and politics of plastics became such a large undertaking that 4ocean is working with the United Nations and large waste management companies to tackle the problem at the source. While it is important to do the cleanup, 4ocean recognizes it is still “reactive” and sees the final solution is to be proactive and to end the problem at its source.

Jackie Price, 4ocean’s director of international operations, explains the complexities of recycling and the circular economy of handing everything from planning to packaging. Once gathered, the plastics have to be divided into seven different types, from bottles and tops to plastic bags, toys, straws, food containers, and even items like disposable Styrofoam coolers and diapers. Metals and glass must be sorted and some recyclers only take certain various amounts and types of product. Price cites the chemistry involved in the blending and treatment of containers to create various products including “food grade” materials. Bottles need to be processed into pellets or flakes to be repurposed, and more options and cost-effective uses need to be investigated.

Even transport of materials is an issue—getting vast quantities of pellets to injection molding companies, as more products like recycled furniture, playground fixtures, drinking cups, and fabrics are being made from recycled plastic. Yet many ocean plastics like bleach and laundry detergent containers are not considered recyclable, and much of it is difficult to sort and clean as it is covered in muck, oil, and contaminants.

4ocean sums up its approach in its own acronym:

A – Awareness-raising and changing behavior

Cooper and Schulze explain that 100% of the sales of 4ocean products go to cleanup—funding their company, its resources, equipment, paying salaries, and expanding to new markets. Since an LLC cannot accept donations, product sales remain its business model and it appears to be working extremely well. The 4ocean mantra, “Let’s end the ocean plastic crisis together,” can be shared by many, creating a movement, led by two young surfers who, rather than expecting someone else to do it, chose to change the world.